We *finally* did it.

We've only been talking about it for two years and at times had taken slow baby steps towards possibly living together. In retrospect, it happened quickly... or maybe we just acted on it quickly. We solidified the plan to go forward with "the big move" while I was in Sarajevo so when I got home I had about 2 weeks to pack everything up but since I procrastinate, I did it in about 4 days. To be honest, we tried to push it back until January but Patrick had already found someone to take my spot for October so it was time for me to leave the Harlem nest.

Ryan and I are learning how to live together. I think the biggest adjustment for me will be learning how to live with a partner as opposed to a roommate. Ryan has already reminded me of this a few times. He's wise like that. In addition to sharing a studio (which for two only children has been a challenge), we're at the beginning of sharing our lives... which is huge. We are figuring out how to both be together and alone in such a small space. We are also realizing that despite major concerns about the two of us living in a studio apartment, we have adjusted the space to make it work. It's now a very different space than it was a week ago when it was just Ryan here.

The move has reminded me of my privilege - not only to live in Chelsea but looking at all the *stuff* I've accumulated over the years, and throwing away so many items for no reason other than not having space to keep it. I donated most of it - but by the end, a lot of decent furniture had to be curbed due to space constraints. By day three all sentimentality had gone out the window and I was throwing everything out.

I've been thinking a lot about the value and meaning that we place on objects. I keep so many items to feel connected with a person, place or space. I'm trying to figure out how to be connected without accumulating *stuff*. I think that may be why I'm so drawn to photography, especially as I get older... it's the idea of holding on to a memory, a person, a place, a space. Maybe some of these things aren't meant to be physically held on to.

In the whirlwind that has been the last 72 hours, I managed to run around the neighborhood and take some final photos on my phone, as my camera was packed. 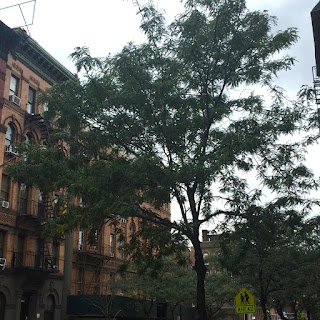 No matter where I go, I always manage to find a piece of nature and get attached. I named her the magic tree and I will miss her. I'd look at her every morning. After the long winter, I'd jump out of bed every morning to see if there were buds on the branches and count the weeks until spring. She turns a beautiful gold in the fall. In fact, her top was just starting to turn. Somewhere in my archive of photos I have a photo of her in each season. I hope the new occupier of 127 enjoys her as much as I have. 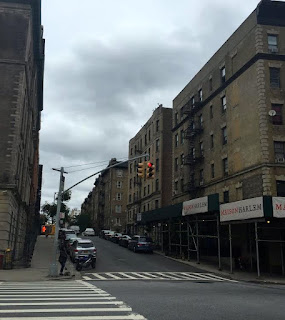 One last photo of the neighborhood - 127 and St. Nicholas Avenue. 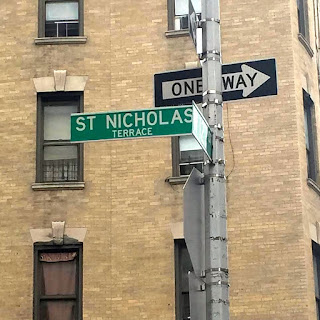 The corner of 127 and the Terrace. 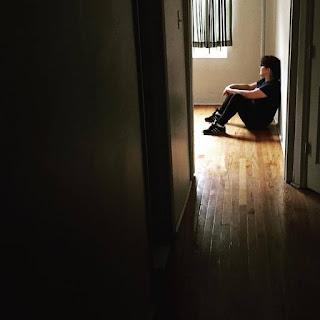 Patrick took this of me. I look sad and nostalgic but I was actually admiring the space without stuff in it and listening to the echo of my voice singing Regina Spektor songs bounce off the wall. 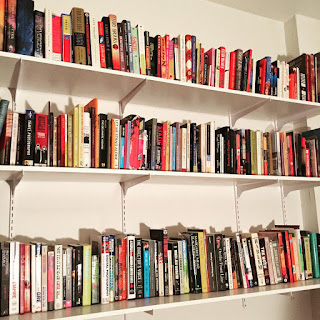 My babies found their new home.

Let's face it... now that *most* of my books have been shelved, I'm feeling at home. We still have boxes everywhere but we've managed to carve out pockets of what will be a lovely new home. We've rearranged furniture and are loading our walls with art, photography and tapestries. The goal is to have most everything done so we can have folks over for dinner next weekend.

Tomorrow I will start searching Chelsea for my new slice of nature to fall in love with. I have a feeling the High Line will help me out...

Posted by introublewiththeking at 9:16 PM No comments: