Not Your Mother's Torture Exhibit

When I was young (like about 4 or 5 weeks ago...) I was completely obsessed with Medieval Times. For those who are not familiar with the age-old suburban New Jersey tradition of attending Medieval Times, it’s a “medieval” (and I’m purposely writing it lowercase with quotes) dinner theatre and jousting tournament. The audience is divided into teams and throughout the night you root for your knight to win the tournament and the heart of the princess. There are castles, kings, crowns, chicken, ribs (you eat with your hands… just like “back in the old days”) but... at the heart of this very special place… and the ONE thing that I was most fascinated with as a nine-year-old (which is probably the last time I visited Medieval Times), was the ONE exhibit my mother would not let me visit… the “medieval torture chamber”, a museum of mock-medieval torture devices.

Well, fast forward 22 years to my roaming around the Belgrade Fortress today (which by the way, has areas dating back to the Neolithic era... read the incredible history on that link) what is the first thing I stumble upon? An exhibit of torture devices from Medieval Europe.

And, oh boy, after 22 years of repression, the rebellion had come...

The truth is, I’ve always had an interest in torture as a performance and disciplinary tool (on both an individual and societal level). I’ve written several sociology papers on it in undergrad and have read a number of books on the topic. There is no shortage of writing on this subject, as I learned when I proposed to write about torture as performance in a class I took on early modern theatre.

(If you are interested in exploring this topic more you should read the first chapter of Foucault's Discipline and Punish which details the public display of humiliation, torture and execution of Robert-Francois Damiens... and take it from there...)

Of course, it’s important to point out that the majority of the 60+ torture instruments that I saw today were used specifically on women accused of witchcraft and anyone accused of sorcery (mostly women, of course).

Here are some photos… 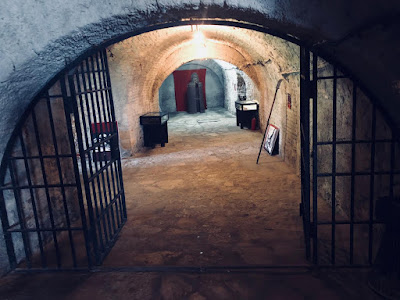 Entering a wing of the museum through the catacombs. 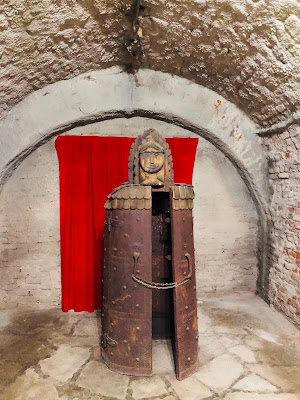 The Virgin of Nuremberg a.k.a. The Iron Maiden

The Virgin of Nuremberg (a.k.a. The Iron Maiden)

Dates back to Germany in 1515, possibly earlier. Supposedly this is one of the first instruments to mechanize torture. The condemned was locked into this sarcophagus (which gets its name from the fact that some folks believed the device resembled a Bavarian girl). Inside they are penetrated with deliberately placed spikes that penetrate the body but purposely avoided vital organs to prolong the suffering of the condemned. 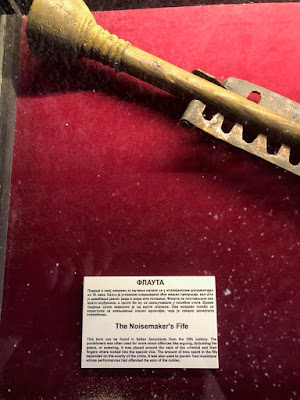 Dates back to 18th century Italy. It was placed around the neck of the “offender” so that their fingers were also locked into place. It was used primarily for minor offences such as disturbing the peace… and also to punish bad musicians. 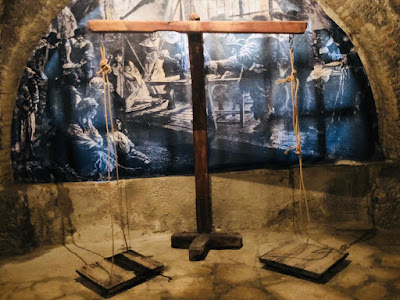 The Medievals believed that witches and other followers of Satan would weigh significantly less than they appear so the scales were developed to weigh people accused of witchcraft. The scales were most commonly used in Belgium and the Netherlands throughout the 18th century. To quote the museum’s information about this device, “There was obviously tremendous room for abuse of the system and it was easy to declare someone guilty. During the 18th century, a court in Oudwater in the Netherlands controlled the weighing of those suspected of witchcraft. If the outcome was favorable to the accused, they were given a certificate to prevent them from any further accusations. The court collected sums of money from people in this way and it became a profitable business. The certificate was so sought after that people traveled from far and wide to be weighed and receive their document ensuring their safety from suspicion. The court had difficulty processing the number of people waiting to be weighed that there was often a backlog" (quote supplied by curating team). 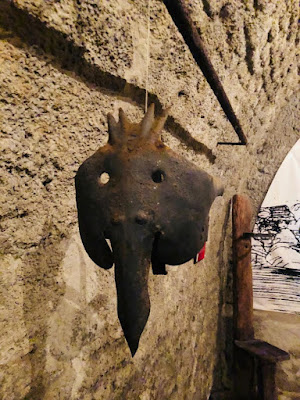 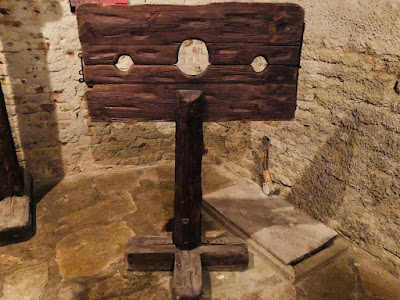 Medievals love some public humiliation (and let's not kid ourselves... as a society we still kind of love it). Many smaller offences involved serving time in the stocks, the pillory, wearing metal shoes or masks. While enduring this, offenders were subjected to being spit at and having food thrown at them. These masks above had no particular torture device attached to them. The purpose was to serve as humiliation. However, you can read about similar more sinister devices here.

While I loved my visit today, I’m not entirely on board with the way in which the exhibit is curated. I think setting these grotesque instruments up as something to “gawk” at (alongside piped in sound effects of chains and torture) completely cheapens the experience and alienates visitors from any kind of meaningful engagement or critical thinking about the objects at hand. Also, aside from the plaque at the entrance, there is not much context or information about Medieval society.

As mentioned, there is a plaque at the beginning of the tour that explains the reasoning for showing all these devices (we should acknowledge our history, etc.) but then tries to say it's not political, when in fact it's nearly impossible to separate politics from torture considering these instruments were mostly implemented by the church which was the governing power at the time. It does provide a little information about Medieval life but appears mostly apologetic. I was also reading the English translation. I don't know if it's different in Serbian.

The practice of torture continues today all across the world. I immediately think of capital punishment in the US, for example. Europe has abolished capital punishment (except for in Belarus) and refuses to sell the United States the drugs needed for lethal injection, which has led to a number of botched and pro-longed executions as states are still trying to figure out the most effective cocktail to use. 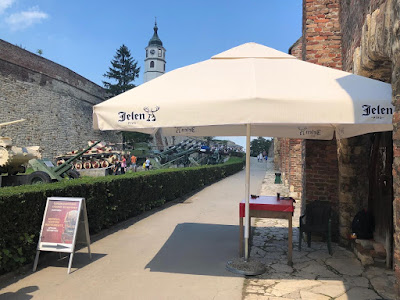 Also, can we call it irony that directly outside the torture exhibit is a display of military weapons and tanks? Obviously, it is all part of the military museum but I can't ignore that, especially given that today is the anniversary of the Srebrenica massacre.

For under $3.00 I highly recommend this museum if you find yourself in Belgrade.

Not to mention, exploring the Belgrade Fortress is a MUST (and worth its own blog post). 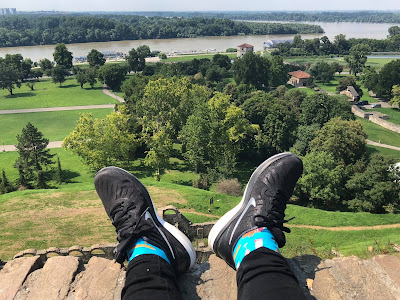 In 500 years I wonder if folks will come across a torture museum showing the electric chair, lethal injection, drone warfare, etc.? I hope humanity has progressed enough that they leave thinking about how inhumane things were "back then" and has no sort of contemporary situations to compare it to. History has shown us that this will probably not be this case.

Also... just worth noting that there is a wonderful sale happening at New Jersey's Medieval Times right now so anyone that wants to take me for my birthday in 6 months, or on a date (wink, wink) can hop on that in August...
Posted by introublewiththeking at 2:32 PM